stories from the suburbs, or something. 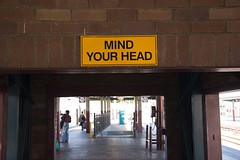 We were in Sydney for Easter, chasing the usual tourist haunts for Lian's visiting mum. The train to the Blue Mountains sped through the western suburbs, flashes of old houses and stations I recognized, but only in name. At Parramatta, I spied the ex-company's logo still on the side of the building I'd spent some time in a few years back, but they'd since closed up last year. Coming home in the early evening, I could see families sitting down to dinner through windows, their houses backing onto the railway lines. It's a bit different to the sights of housing next to railways in south-east asia, but it's always home to someone.

Later, a net friend asked "did you stop by Newtown? I'd love to see your take on it". I didn't - we only hung around the city apart from the train journey out west - but I'll return some day to properly wander the suburbs, to see how it's different and yet still the same.

It was comforting seeing all the lizards roaming the Chinese Garden, right next to Darling Harbour with its freeway overpasses and waterside tourist mania. I tried taking a great J.G. Ballard-inspired shot of palm trees in front of the overpass, but it didn't come out satisfactorily. The image stays with me, though.